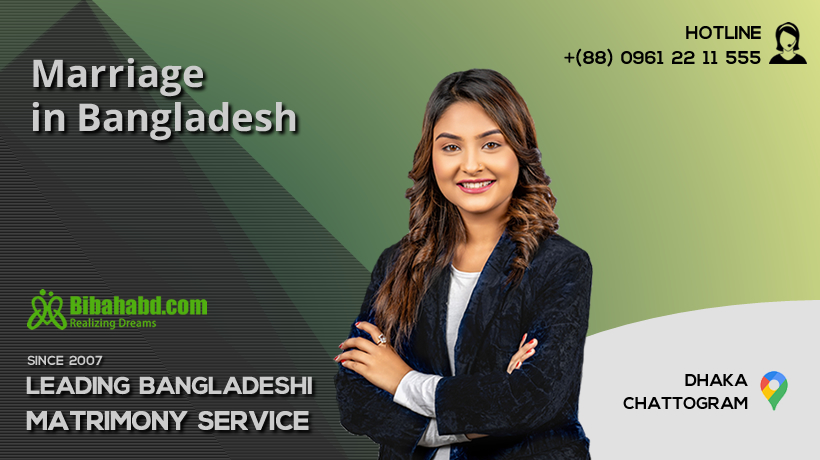 Arranged marriage occurs when a member of the family, a close friend or a third person party helps bring two supposedly compatible people together in matrimony.

Like many non-industrial societies, in Bangladeshi culture, marriage is seen as a union between two families rather than just two people. Within Bangladesh, arranged marriages are arguably the most common form of marriage and are considered traditional in society.

How can I get married in Bangladesh?

1) Offer from one part and acceptance from the other.
2) According to sharia law, two male or one male and two female witnesses. whatever, The Marriage and divorce registration act 1974 equally treated both male and females.
3) Both the parties must be free in their consent.

How long do Bangladeshi weddings last?

Even though religious ceremonies are distinctive for a Hindu and Muslim wedding, there are some ceremonies that are common for weddings in Bangladesh. A Bangladeshi wedding lasts for 3 days, starting from engagement until bou bhaat(reception).

Can foreigners get married in Bangladesh?

Answer: Yes. Bangladesh Government has made provision of Registration of marriages which came into force in April-2012. Bangladeshi and Foreigner can register their marriage in accordance with The Special Marriage Act, 1872.

What is the law of marriage in Bangladesh?

In Bangladesh, marriage laws are based on a combination of religious and civil law. Civil laws dictate that the legal age of consent and minimum age for marriage is 18 for women and 21 for men. Bangladesh does not have a specific law banning forced marriage.

What is the punishment for second marriage in Bangladesh?

Whoever, having a husband or wife living, marries in any case in which such marriage is void by reason of its taking place during the life of such husband or wife, shall be punished with imprisonment of either description for a term which may extend to seven years, and shall also be liable to fine.

Like many non-industrial societies, in Bangladeshi culture, marriage is seen as a union between two families rather than just two people. Within Bangladesh, arranged marriages are arguably the most common form of marriage and are considered traditional in society.

How many wife can you have in Bangladesh?

In Bangladesh multiple marriages doubled in the last decade. The limit is usually four wives, but money is the key determinant. Islamic law allows for 4 wives, consultation with existing spouses, and equal treatment. In practice spousal support may not be evenly or fairly distributed.

What is the main reason for divorce in Bangladesh?

How long does a divorce take in Bangladesh?

Time to complete the divorce process: The one sided divorce or divorce by notice can be completed within 90 days from the date receiving the notice by City Corporation or chairman. To complete a mutual divorce, in practice, both the husband and wife take their decision of giving divorce.

How much does a divorce cost in Bangladesh?

As per marriages and Divorces (Reg) Rules, 1975: A Nikah or Marriage Registrar shall charge a fee of BDT 200 (Two Hundred) for registration of divorce. The marriage registrar may also claim BDT. 25 as commission fee and BDT.

Is divorce common in Bangladesh?